Intelligent and athletic, the Doberman Pinscher has long been popular as a guardian, police dog, and war dog. The Doberman is affectionate, loyal, and obedient. They can make a good family dog but much depends on where you obtain your Doberman, as some lines are better than others in terms of temperament. 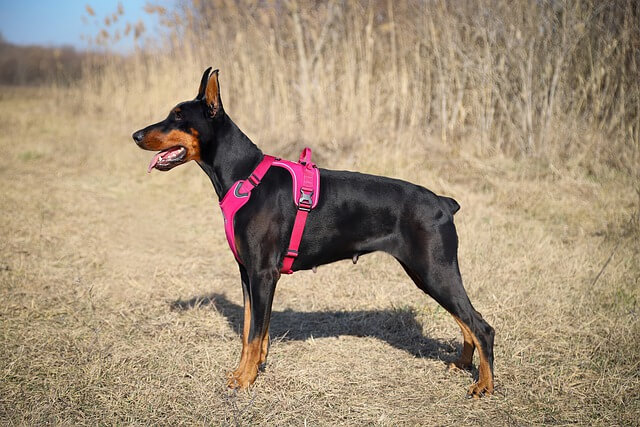 History of the Doberman Pinscher

The Doberman Pinscher is said to have originated in Apolda in the state of Thuringia, Germany around 1890. The breeder was a man named Karl Fredrick Louis Dobermann. Dobermann wanted to create a breed for protection when he collected taxes. He is also said to have run the local dog pound so had access to many different breeds of dogs. Later others continued to work with the Doberman dog that Louis Dobermann created. It’s believed that the dogs used to create the Doberman Pinscher included the Rottweiler, the German Pinscher, the Beauceron, the Thuringian Sylvan Dog, the Greyhound, the Weimaraner, the Great Dane, the German Shorthaired Pointer, the Old German Shepherd Dog, and the Manchester Terrier. In Germany and Britain the dog is known as the Doberman, without the word “pinscher” as pinscher means “terrier” in German and the dog is not a terrier. However, in the United States the word “pinscher” is still part of the breed’s name. The Doberman Pinscher was recognized by the American Kennel Club in 1908.

The Doberman Pinscher typically lives between 10 and 14 years. The breed is known to suffer from some serious health problems, though not all dogs have these problems. Problems that may appear include von Willebrand’s disease (a bleeding disorder which is similar to hemophilia in humans). A test has been available for this disease for several years to help breeders avoid using animals that carry the gene for the disease. Dilated cardiomyopathy can appear in the Doberman. Dilated cardiomyopathy is believed to be more prevalent in Dobermans than in other breeds and it can be fatal to Dobermans. It appears to affect Dobermans more severely than other dogs.

Cervical vertebral instability (CVI) also appears in Dobermans. Prostatic disease is also possible. The Doberman is believed to be more susceptible to this disease than other breeds. Other issues include hip dysplasia and hypothyroidism.

If you are thinking of getting a Doberman Pinscher you should talk to the breeder about health issues in the breed and find out what health testing they have done on their dogs. Ask what health problems have appeared in their bloodlines, how long their dogs have lived, and what the causes of death were.

Although many people believe Dobermans are a fierce and aggressive breed, they are normally very sociable toward people and they can get along quite well with other dogs. Studies show that Dobermans are not likely to show aggression toward their owners. They are more likely to show aggression toward strangers and other dogs but they aren’t among the breeds most likely to do so. They were originally bred to be personal protection dogs and they can be quite intimidating to strangers. They are brave and they will defend their owners but they are normally very obedient dogs. Breeders in the United States and Canada have worked for decades to make sure that Dobermans have reliable, stable temperaments. These dogs are loving, loyal, and gentle and can make excellent family dogs as long as they are well socialized when they are young.

However, not all Doberman Pinschers are properly socialized when they are young. If you get a Doberman Pinscher from a bad breeder or if you get a puppy and you do not socialize it properly, then you can have a dog who has temperament problems. The dog may be too aggressive toward strangers and it may not be properly obedient to the owner or gentle enough with the family. The Doberman is a large, powerful dog and it’s important that these dogs are well socialized from the time they are puppies. Good training is very important with this breed and they should at least learn basic obedience commands from a young age.

Doberman Pinschers are extremely intelligent dogs, ranking number 5 on the list of intelligent dog breeds according to Dr. Stanley Coren’s book The Intelligence of Dogs. They are usually easy to train. If you get a Doberman Pinscher puppy then it’s a good idea to sign up for a puppy preschool or puppy kindergarten class so your puppy can have some socialization with friendly people and other puppies. Then continue with a good basic obedience class.

Dobermans can excel at many dog activities and dog sports such as obedience, agility, rally, musical freestyle, tracking, herding, frisbee, flyball, and the list goes on. They are very bright, easy to train, and they enjoy working so you can really do almost any kind of sport or activity with these dogs. They love to play and they have fun doing things with their owners.

The Doberman Pinscher is very easy to groom. They have a short, sleek coat that needs to be brushed about once a week to remove any loose or dead hair. You can run a hound glove or damp cloth over the coat to keep it looking sleek. They are average seasonal shedders so brush your dog more when they are shedding to keep dog hair from accumulating in your home. Bathe as necessary.

You should clean your dog’s ears weekly to prevent ear infections.

Trim your dog’s nails on a weekly basis to keep them short. If you trim them each week, removing just a small amount of nail, then you won’t cut the quicks or harm your dog.

Most people don’t realize how playful Dobermans are, possibly because they are afraid of them. But these dogs love to play like big puppies. They need lots of regular exercise. They can be good apartment dogs as long as they get plenty of exercise. They are sensitive to cold weather so you sometimes see a Doberman wearing a sweater or jacket.