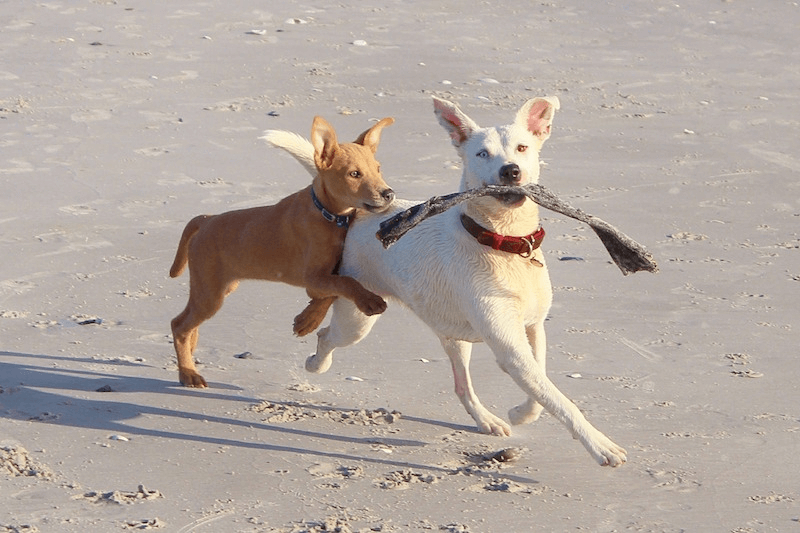 Understanding why dogs behave in certain way is not always an easy task. The purpose of this guide is to help you gain insights into the realities behind your dog’s behavior, manage challenges, and greatly improve the relationship and communication with your dog.

What will you learn?

Most of what we refer to as a “behavior problem” is actually normal puppy or dog behavior, however dogs are not aware that we humans perceive that behavior as being wrong or potentially harmful. Dogs are not capable of differentiating between what humans describe as right and wrong (guilt is a distinctly human emotion, not one shared or even understood by a dog).

An innate behavior (also known as instinctive or natural behavior) is one which a dog is born with. Innate dog behavior goes back to their nature as predators and as animals that are programmed for survival. The behaviors dogs display can often vary substantially from breed to breed and because of this, dogs are used by humans today to perform a large variety of tasks, including herding or guarding livestock, pulling sleds, tracking or retrieving game animals, locating lost people or disaster victims, and assisting handicapped people. However, as early as 14,000 years ago, there were no domestic dogs. There were wolves, coyotes, and jackals – all potential ancestors of the dog – but no dogs. Evidence has shown that the dog is a very close relative of the grey wolf, but nevertheless, dogs are not wolves and we shouldn’t treat them as such.

Today, it is clear that the evolution of the dog is being shaped by artificial selection because many dog breeders select dogs for certain working behaviors or, more often, a certain desired look, however, selective breeding have failed to stop dogs from being social predators.

The innate behaviors that come with the dog are:

What is Learned Behavior?

Learned behavior is nothing more than the acquisition of new behavior guided and/or modified by the influences of the surrounding environment. Learning occurs during the lifetime of the dog. Puppies can imitate the behavior of the mother while adult dogs can imitate other dogs by simple observation. Dogs can also learn by motivation, this is by responding to a rewarding experience, and we humans can shape our dogs’ behavior by training them to perform specific tasks.

The development of behavioral problems is often the consequence of a response to fearful stimuli. In layman’s terms, your dog can learn to misbehave if he is exposed to situations that scare him.

Lastly, a dog with poor socialization or deprived of environmental exposure will often develop long-term and irreversible effects on behavior. Traumatic experiences and medical conditions at early stages of life may also have a negative outcome on the puppy’s ability to learn and socialize.