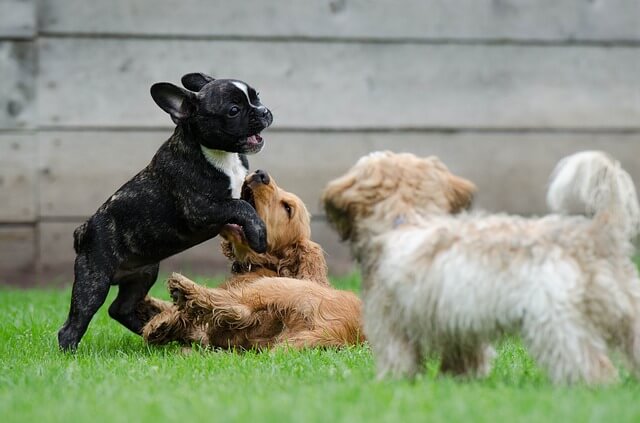 The purpose of socializing a puppy is to introduce him to as many experiences as possible. In other words, teaching the puppy to tolerate certain situations or experiences by repeatedly exposing him to such situations. The technical term for this practice is habituation.

Puppies should have the opportunity for exploration. At this early age, puppies learn at an incredibly quick pace. As a pack, puppies will gain confidence. As they mature, each puppy will learn independence. After getting a puppy, new owners should continue the exposure through the next eight-to-20 weeks by allowing the puppy to investigate his own home environment and other environments as well.

A well-socialized puppy that has already experienced an assortment of things, heard different noises, been taken to different places, interacted with different people and children will become more adaptable and confident.

How to Socialize your Puppy

There are eight main activities you need to do to socialize your puppy:

1. Socialize with other puppies and dogs

By exposing the puppy to as many dogs as possible, the owner will have a more confident dog and reduce the risk of dog on dog aggression. The idea of this exercise is to put the puppy in different situations where he can encounter another dog. The puppy should be exposed to other puppies and adult dogs in different places.

The dog park is a good place to start as they have divided areas for small and large dogs. Start with the small ones or the ones that are his same size and gradually introduce him to bigger dogs. Then practice on the street with stranger dogs (both, puppy and dog on leash), inside the house and in the front yard (maybe by inviting the neighbor or friends over with their dogs), and finally at the vet’s office or the groomer.

This type of socialization should begin after the puppy has received all the necessary shots (around week 12).

2. Socialize with people and children

Puppies should be exposed to as many people and children on as possible. This includes but is not limited to: babies, young children, teens, middle aged adults and elderly people … all on a daily basis. You must also expose him to different “characters,” such as people with hats, teenagers on a bicycle or rollerblades, men wearing glasses, old ladies with umbrellas and babies in a stroller. The more people and children the puppy interacts with the better.

Your puppy must also learn about different situations where he will be “handled” by different people such as the vet, the groomer, the pet sitter and the trainer. In this case, you should not only take him to visit these people, but also practice at home by pretending that you are examining the puppy’s body or simulating a bath. The idea behind these exercises is to reduce fear and habituate him to different situations where the owner would not be present.

So as to teach the puppy not to be aggressive around his food bowl, toys and treats, these exercises should start at a young age. A great number of dogs have tendencies to guard their food and toys and that is why the puppy needs to learn to be comfortable around people while eating or playing to prevent futures problems. In order to reduce the risk of a possible bite, these exercises should be practiced by all members of the family and, if possible, by visitors as well.

The exercises with the food bowl are simple to perform. Every time the puppy is eating, people should walk by, approach the bowl, touch the bowl and even sit right next to the puppy while he is eating and practice not only touching the puppy and the bowl, but also removing the bowl for a couple of seconds.

One must be aware that there are some objects that are more important to the puppy such as bones. If that is the case, the treat in exchange must be of a greater value (a special treat) such as cheese or even table food.

The purpose of this exercise is to take the puppy to different places where different things happen, such as the market, the beach, a coffee shop, a park, a car ride, busy roads, etc. Each place has its own sounds, smells and people. That is why the puppy should be exposed to all this, making him more confident.

Also, he should get used to things that “move fast” such as rollerblades, bicycles, cars, skateboards. Dogs love to chase, so with a leash, some boundaries and practice he should be fine around those “moving things.”

Noise phobia is common in many dogs. It is understandable that a dog may be hesitant, or even frightened by a strange loud noise. However it is important to take proper steps to ensure that a noise phobia does not develop.

At an early age, the puppy should be exposed to different levels of noise in order to “desensitize” him. There are some places that sell CDs or cassettes with pre-recorded common noises that dogs are afraid of such as thunder, fireworks, trucks, cars, babies crying, etc. The idea behind desensitization is to expose the puppy to those noises at a low volume level and gradually increase the volume to reduce the fear of it.

Some experts recommend exposing the puppy to the actual sound (e.g. during a thunderstorm ignore his fear by giving him a treat or distracting him). During these times, it is not recommendable to reinforce the fearful and phobic responses with petting and reassuring vocal intonation. This would serve as reinforcement for the behavior and make it continue. For some dogs, placing them in their favored resting area in a room or area that has been sound-proofed and playing some calming music may help to decrease the dog’s reaction.

It is not easy to wait for specific situations to happen, but in the mean time you could practice exposing him to normal street noises, motorcycles and other situations where loud noises occur.

7. Introduce to other animals

The puppy should be also introduced to other animals such as cats, horses, birds, etc. The goal is to prevent chasing other animals and fear from those animals.

The purpose of teaching bite inhibition to a puppy is to control his bite strength. Biting and mouthing are normal behaviors in puppies. However the force of the bite needs to be controlled at an early age in order to prevent future aggression or hurtful situations.

During the first weeks at home you will follow some steps to complete this type of socialization activity. First, practice letting the puppy chew on your hands to monitor the pressure. Once the puppy uses harder pressure, cry out in a high-pitched “OUCH” and walk away from the room. Repeat this exercise until the puppy is able to control himself. Second, practice some hand feeding by holding the food with your fingers and giving it to him. If he bites hard, hold the food and use the “OUCH” technique. And third, frequently brush his teeth to get him used to having your hands inside his mouth.

A solid puppy socialization schedule can set you and your puppy up for success. The chart below shows each activity to follow per week. Remember that there is a small window of opportunity to socialize a puppy, that critical period ends at 16-18 weeks of age.

Print out this handy chart to get your puppy ready. Download it here.

Some Problems that a puppy may develop if undersocialized

Fear is a common denominator for most of the problems that develop when a puppy has not been properly socialized and exposed to different stimuli. While fear can be inherited, “most dogs develop a fear response to new and unusual stimuli that they have not experienced before they were sixteen weeks old” according to veterinarian and author, Bruce Fogle. In other words, dogs that have been deprived of normal exposure to common situations, people and places will be afraid of them during adulthood.

When fear is in place, the emergency response mechanism of the dog’s mind and body is activated and high stress levels will cause a chemical imbalance in the brain. Fear is expressed in two different ways:

• Passive defensiveness, flight, freeze and appease. The dog will try to run away from the situation. Some dogs will hide, shiver and urinate. Other will display anxious barking, reactiviness and/or stiffness (freezing in place).

• Active defensiveness; in some situations the dog won’t be able to flee from the situation and that is when the dog may bite (fight).

Phobias are also a consequence of the lack of socialization. By definition, a phobia is a persistent, abnormal and irrational fear of a specific thing or situation that compels the dog to avoid it, despite the awareness and reassurance that it is not dangerous.

Dogs can develop phobias to almost anything if the situation was so unpleasant that they were not able to manage their own fear. The most common cases of phobias are loud noises such as sirens, fireworks, storms and other situations like veterinarian visits and even shadows or a specific object. Fogle explains that not all fears become phobias and phobias do not necessarily involve flight or fight.

As explained before, the puppy should be introduced to people, children, other dogs and animals at a young age. Failing to do this will result in aggression, biting and possible dog fights. While fear is one of the most common reasons for aggression (active defensiveness), an undersocialized puppy may develop other types of aggression as he grows older. “Lack of experience with a dog’s own species leads to fearful behavior and, possibly, defensive aggression directed toward it own species” (Aloff). In the same way, lack of experience with humans (including children) and third species (cats, horses, etc) will lead to aggression tendencies.

The following are the most common types of aggression that a dog will display while undersocialized:

Fears, phobias and aggression are not the only problems that a dog may develop if not properly socialized. Other problems involve: learning disabilities, jealousy, insecurity, anxiety, submissive urination, barking, sexual disorders, running away, destructive behavior, etc.