Counter surfing is a less than ideal behavior that many dogs develop. Once a dog develops a real knack for it, it is harder to undo. It’s always best to either avoid developing the behavior altogether or to stop when it first begins. 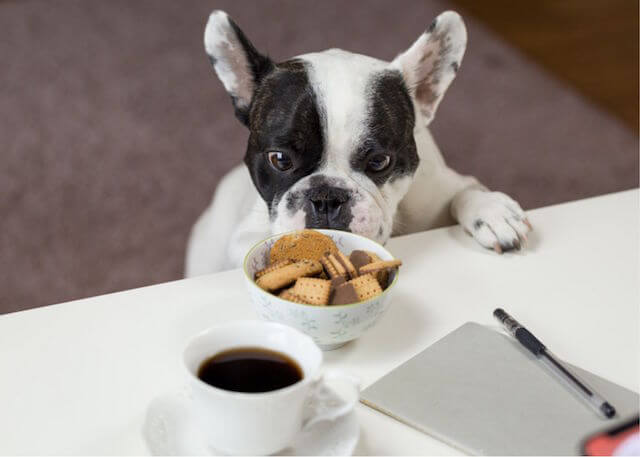 Counter surfing is really a behavior that occurs mostly with medium to larger dogs. That’s only because small dogs just can’t get up there or they would. It happens because dogs are largely opportunistic creatures. It doesn’t say anything about your relationship if your dog checks out the counter. Instead, it says your dog is curious, investigative, or opportunistic. These can all be good traits in the right venue, but largely, they aren’t considered wonderful when your dog is routinely checking out the counters.

The first step of getting a dog to not counter surf is to limit the reasons for him to do it. The dogs with the worst issues are those dogs that have many temptations hiding up on those counters. It can be very hard to resist. To illustrate, imagine whatever your favorite food in the whole world is. Imagine that you have a table full of this food and someone says, “Hey, you can’t have any!” But, then that person leaves the room, and you’re left with the table full of your favorite item. That would be a big temptation for anyone, and most likely, you’d sneak a bit or two. Dogs are the same way. If you leave items that draw your dog’s attention to the counter, he’s going to stand up to see what it is.

For most dogs, food is the number one reason that the dog counter surfs. This is simple: put the food away. Don’t leave leftovers on the counter or tasty morsels in plain view. Put them in the refrigerator, drawer, or closet. If you must leave something out, consider using a baby gate at the entrance to your kitchen so that the dog can’t visit the area. Prevention is the easiest method to limit counter surfing.

The next step to limiting counter surfing is to keep an eye on what your dog is doing. This is especially important for a dog that already has a well-established habit. Not only does he need to learn an Off command, he needs to learn you’re watching him at all times. The second you spot him looking up, getting ready to stand up to sniff, etc., you need to immediately move into to stop it. You can use your body to move into him, for instance, if he is standing up on the counter, move horizontally into him so that he has to move over. Continue moving into him until he runs out of counter or decides it’s easier to just get off. As he falls off, be sure to say Off, so that he pairs that word with the action. Then you have a command to use in the future, without having to physically move into him.

Sometimes dog counter surfing is a larger problem when you’re in the kitchen preparing the actual meal. This is just because you are working with food, and this stimulates your dog to want to eat. There are ways to work with your dog that moves his attention away from the food you are preparing onto something else.

You could use a baby gate so that he can’t enter the kitchen but can instead watch you from just outside the kitchen. This can be used to temporarily teach a boundary line and can be gradually removed or can be left in place.

Or, how about giving him something totally different to do? This can be an excellent way to divert his attention onto a much more appropriate activity. Consider feeding him his dinner in a treat/food dispenser toy(s). These toys, such as the Kibble Nibble or Buster Cube, for example, can be filled with his dry dinner, and then he can play with the toys to retrieve his meal. If you’d rather not feed him his whole meal this way, you can still utilize food toys to your advantage. For example, try filling up a rubber Kong toy with a variety of foods. There are recipes easily available all over the internet, but you can use a variety of foods. You can be as creative as you want to be and layer edible items or you can just use one. It can be as simple as smearing peanut butter inside or using a canned food and freezing it. It is unlikely that your dog will counter surf if he is busily working his way through a treat dispenser or stuffed Kong toy.

Prevention is the name of the game with counter surfing, but utilizing strategies to divert your dog’s attention onto more appropriate activities can also help shape his behavior into something you’d rather have.