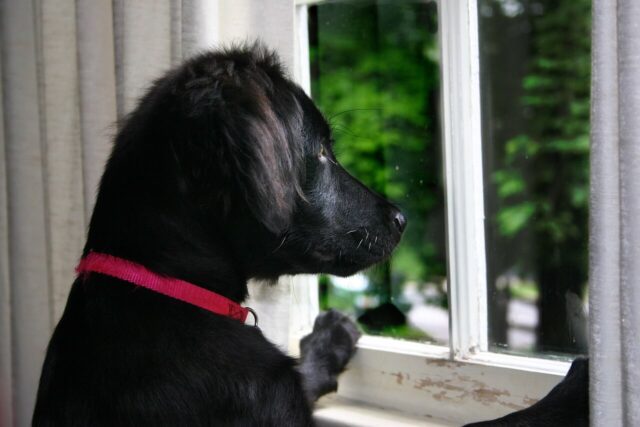 Each year many pet owners deal with a problem that is fairly common among their pets. Nevertheless, it can still be quite frustrating and difficult for both the pet owner as well as the pet. This problem is separation anxiety, also sometimes referred to simply as SA.

What is Separation Anxiety

What are the Causes and Signs

Dog separation anxiety is sometimes the underlying cause of several behavioral problems in dogs including escape problems, destructive behavior, submissive urination and excessive barking. A pet that suffers from separation anxiety may exhibit a variety of different signs or symptoms. It is important to understand that this condition is much different from boredom, although the two issues can result in some of the same behaviors, such as pawing, digging, chewing, etc. The main way to differentiate between the two is that separation anxiety will start up as soon as the owner leaves, whereas it could take an hour or two before the signs of boredom begin. It should also be noted that most puppies do exhibit some separation signs at some point or other, although they typically grow out of it as time goes on.

Other signs of separation anxiety can include yelping, howling, excitement, hyperactivity, inappropriate urinating, diarrhea, defecating indoors, vomiting, depression, excessive salivation and even aggressive behavior when the pet believes you are about to leave. These signs may appear either when the pet thinks you are about to leave or just as you have left. It should be understood that all pets are different and may exhibit the signs of separation anxiety differently.

In addition, dogs and puppies with separation anxiety often display signs of extreme attachment when the owners are home. These may include:

The causes of separation anxiety can vary among dogs. As previously mentioned, it is fairly common for puppies to experience this problem, although most eventually grow out of it. This problem can also result from a change within the pet’s schedule. For example, if the dog must be left along for a period of time that is longer than normal, he may develop separation anxiety. Certain breeds of dogs, particularly those that are specifically bred for guarding and herding, seem to suffer from this issue more than other breeds. In other cases, if a dog has been in multiple homes or has been rescued from a shelter, he may be more at risk for developing separation anxiety.

If you think that your dog may suffer from separation anxiety, keep in mind that it is always a good idea to take your dog to the vet for a thorough check-up, just to rule out any possible medical conditions that could be contributing to the symptoms that you have seen. Your vet will be able to examine your dog and determine whether there may be underlying medical problems that could be contributing to your pet’s health issues or whether the problems that are occurring are a result of separation anxiety.

Once you have ruled out any possible medical conditions, it is important to recognize that you and your pet can receive professional assistance with separation anxiety which can help both of you live a happier and better life.